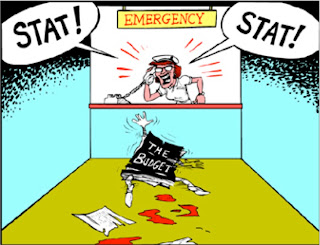 With an 8-5 vote last night, the Troutdale Budget Committee directed that city staff come back with alternate city budgets to compare with the existing proposed 2012-2013 budget that spends $350,000 from the city's reserve dollars-- an alternate proposed budget that spends only $150,000 from reserves, and one that spends zero dollars from reserves. They want to see what these deeper budget cuts would look like. City staff will be providing these alternate budgets to the committee at the next budget meeting early next month. (See the proposed budget here).

I spoke at the public comment portion of the budget meeting asking that the budget committee direct staff to live within their means and stop the city's deficit spending. The City of Troutdale's budget has been approved with more expenditures than revenues for years, and now their reserves are nearly tapped out.
at 4/19/2012 06:56:00 AM


Comments are moderated. Anonymous comments and ad hominem attacks will be deleted.